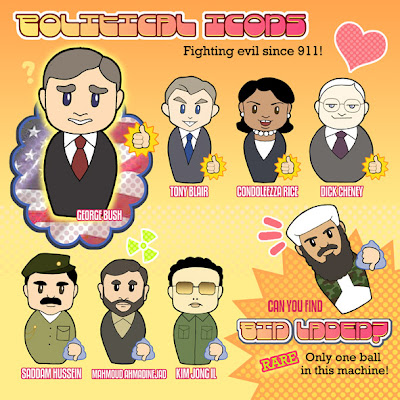 One idea for a toy capsule. A reflection of gashapon series which relate to manga, anime or video game characters....usually eagerly sought after by 'otakus' (geeks in said areas of entertainment). By using universally well-known figures, it should give everyone a sense of being an 'inside expert'. Also leads to pressing questions including: Is Saddam worth more or less now that he's dead? Would you be happy if your first capsule contained a 'baddie', or would you keep buying until you get one of the 'good guys'? Would critics of western politics want the collection for subversive means? Does the Bin Laden ball really exist or did I just put it on there to get more people buying capsules?
Posted by gdcom student at 02:38

I really like this idea Jo. Some of the characters transform as cartoonies surprisingly well. I think the way in which you are thinking about the pscyhology behind collecting will def hep you determine what should be going inside.

Your drawings look really good! Weird to see those characters drawn as manga!
The political thing... would it be collectible? Is it for students? Cos I'm not sure about students collecting political figures.
Sorry if i'm missing something! I'm being quite negative...
C*

Good point...I'm hoping that it may vary depending on the individual, rather than a general consensus that design students aren't interested in politics. But if that is the case, then I could try it with celebrities or royals!

Love Dick Cheney! Should be thumbs down for all the western politicians as well though XD

You run the risk of people thinking you actually support the Bush administration.

I think celebrities would work much better... especially taking an humorist approach!! We like taking the piss out of them...
C*

I was trying to avoid 'glamourising' dictators so I think I may have made the Bush administration look too good :P (Though I did add a question mark near Bush's head to show that he probably doesn't know what's going on!) Thanks Cristina, I'm going to work on a celebrity series today!

Cris and I were discussing this yesterday...(see got us all talking about it!), I still think that there have been so many global/ controversial political affairs in the past year or so, it would almost be a shame not to include politicans/political leaders. I think it would add depth and variety to the pods, not to mention archiving a particularly significant point in history...(wow that was exhausting!)
Melissa

i wouldn't be happy to spend a quid on bush thank you very much! celebs much more fun!