Been working on my figures...have decided to go for semi-relief magnets out of polymer clay. The relief gives it a 3-dimensional toy feel, polymer clay resembles plastic in consistency and weight and the magnet ensures that it won't get damaged or bashed about. Facing the mammoth task of making 200 figures by hand. After a lot of trial and error, this is the method I developed:
(Simon Cowell has volunteered for the demo)

1) Cut out card templates for each character, and various body parts. Relevant shapes are cut out of polymer clay and 'stacked' to create a rough relief.

2) Edges are smoothed down using a rubber shaper and various other tools. This completes the sample model. One sample is made from scratch for each character (26 altogether).

3) Character is heated for 30mins at 130 C to harden the polymer clay. (My temperamental fuse-blowing oven makes this stage a lot more precarious than it should be.)

4) Fired figure is covered with Siligum, a silicone moulding putty. Took a number of tries to get it right...my first attempts had too many air bubbles which made the mould useless.

5) Siligum hardens after 5 mins and figure can be released from mould.

6) A soft piece of polymer clay is pressed into the mould and pulled out.

7) Extracted figures are given some finishing touches and then fired.

Stages still to go include sanding the surface of all 200, painting with acrylic, transferring facial features with Safmat film (Letraset film for inkjet printers), varnishing and sticking the magnets. Also sourced a bunch of tiny magnets for Britney Spears' wig and Swarovski crystals to decorate Paris Hilton with. 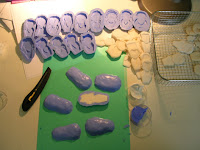 Joanna, this seems so fiddly, you have done a really good job with Simon, good luck with painting them.
Asya

You're hands are tiny!! Yikes! They'll def come in hand for all those little people! Well done, you must be so proud to see them all take shape. can't wait to buy one!

I m on the line to get the first one :)
they're looking so great!
Continue strong through the painting**

It looks that they are coming!! For you it might be like giving birth... painful but wonderful!! They look fantastic at this first stage! Well done! (I want one, at least)
Cristina

Come on round and use my oven some time if yours doesn't stop being troublesome :)

what patience joanna! Admire you for this its great!

LOOKS LIKE FUN! Wish I was there, they're going to look great!