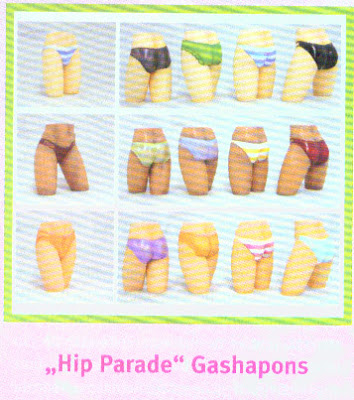 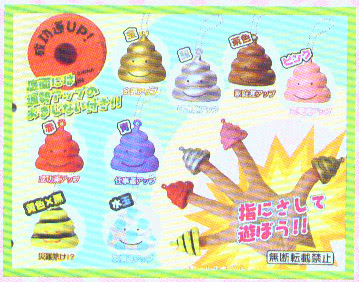 I found these in a magazine today and had to scan them for my blog (sorry for the dodgy picture quality). The first one is a gashapon set called 'Hip Parade'. Euphemistic title aside, it's basically a set of crotches. (Reminds me of Theresa's beer mats!) The second set shows 'Unchis' which translates into 'turds'. These are surprisingly common in japanese pop culture, and crop up in manga, anime, toys and clothing. The sheer absurdity of collecting multi-coloured piles of poop to put on your fingers is so strange it's almost enticing. It seems like it's going to be slightly more difficult to subvert gashapon... considering that such sets actually exist within an entirely mainstream context!
Posted by gdcom student at 11:21

Wow, so people actually collect poo in a range of colours to put on their fingers. That is so wierd. What can you design to top that.
Asya

Have you seen them in South park as well?
I guess this weirdness is not only Japanese like! We might end up collecting them as well... not sure what for...
Cristina

Well, your objects keep getting weirdier and weirder, and here we were all thinking you were a sweet little girl! Can't wait to see whats in my pod!

Have you started making your gashpon toys/artwotk? are they going be quite general themes or are you going to direct them at particular social groups like the ones you find in specific areas of Japan? Really excited to see more of this, so pointlessly funny!

ps i saw some subverted cross stitch in the design musem it was DIY 'home sweet fucking home' in a english twee style. might be of interest.
Ax